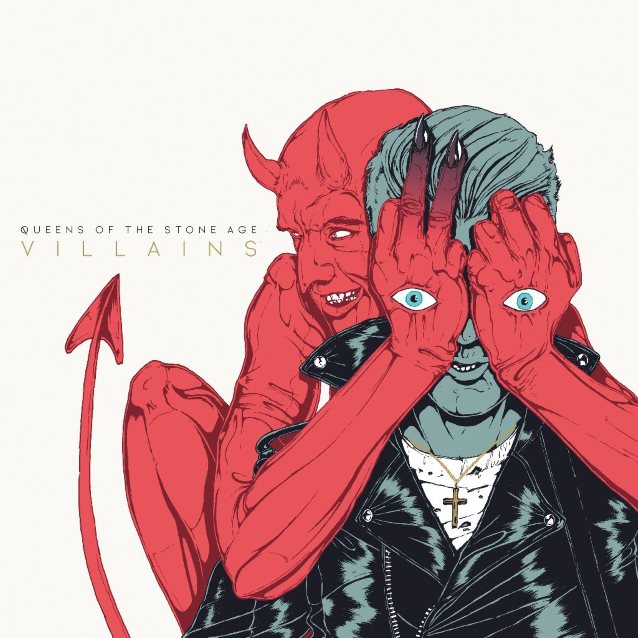 It has been four years since Queens Of The Stone Age released a studio album. Friday is the day the long awaited seventh studio album “Villains” will be released. Nine brand new tracks for your ears only.

“Feet Don’t Fail Me” has the pleasure of being the opening track. The one track that sets a tone for the whole album. The track that determines if one should listen to the next track or not. It starts out low in volume and builds up gradually with some sound. But the song really does not start as a song until 1:50 minutes in. I guess since we’ve been waiting for four years, why not wait a couple of minutes before we can really hear their new sound, right? But ones it starts it is not half bad. Being followed by “The Way You Used To Do” makes it better.

The songs are very melodic. Interpret that sentence anyway you like. Or maybe I should just say it straight out: it is not as rough than their previous records. Not that it is a bad thing. I happen to like it. “Head Like A Haunted House” one of the few songs with a more upbeat vibe.

The album ends with the epic “Villains Of Circumstance”. Once you hear it, you will know what i mean. There are just some songs that are so great, so amazing, that words can’t do them justice. This song is one of them.

Overall it is clearly the album is more for dancing than headbanging.

After listening I am left with the thought: didn’t Queens Of The Stone Age used to be louder?

Psst. QOTSA will be playing at TAP1 in Copenhagen the 14. November!
And.. Don’t forget to check our the music video for “The Way You Used To Do” on Apple Music.